Apple’s March 9th keynote unveiled the incredibly thin, slightly more powerful, and beautifully Retina-display’ed MacBook. It also came with a new design twist: it has one port, and only one port. And it’s not a port we’ve seen on any Apple product before. It’s not Lightning, Thunderbolt or USB Type A. 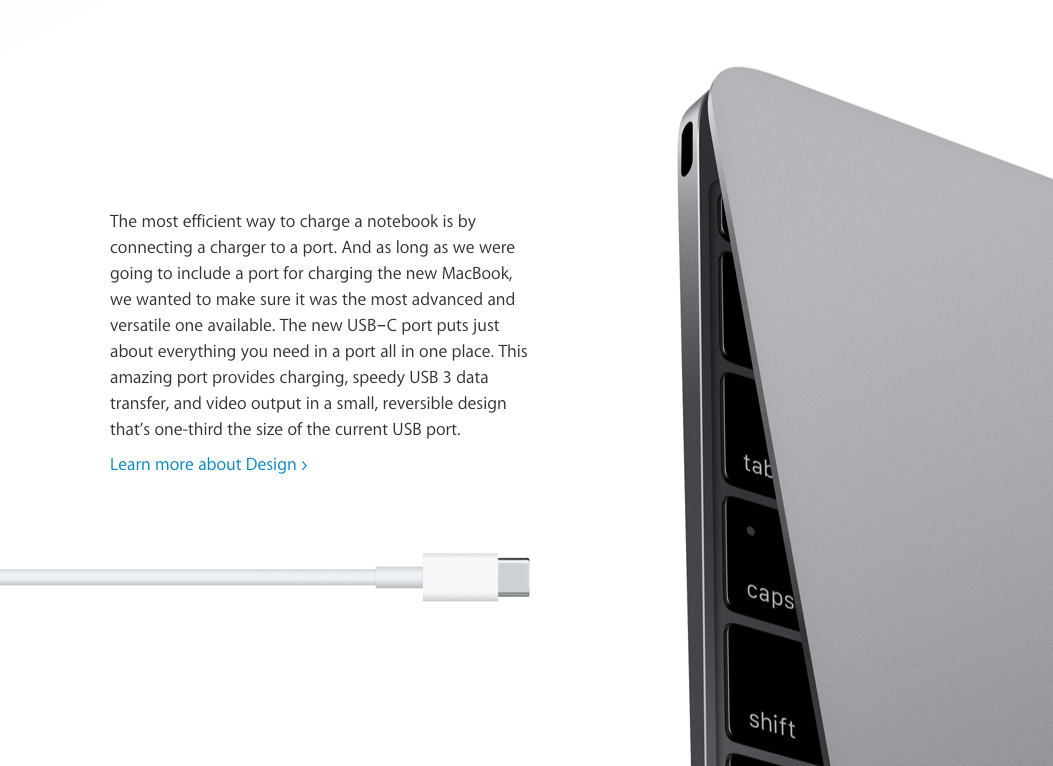 A decent improvement over the USB physical connection standards we’ve endured for the last decade plus, USB-C lets you insert your plug in “both ways”, improving your chances of getting the insertion orientation right the first time from 50% to 100%. So that’s nice. It’ll also carry far more power than previous USB specs which means the new MacBook will be using it’s one USB-C port for data and charging duties. Apple plans to take advantage of the improved power transfer capabilities to make the single, USB-C port on the new MacBook do double duty as both a data port and the port over which you replinish your svelte new computer’s depleted batteries:

One is a technical limitation. Battery charging is reasonably complicated and allowing multiple ingress paths for electricity to reach the circuit that charges the battery is hard. What happens if you put two chargers in to two different ports? How do you protect from a potential melt down in a case like this? I can see Apple punting on having to solve these overly hard problems by saying, “there’s only one port from which you can charge your laptop” and making that a hard rule for whatever design happens. That means you either have one, unique, charging port, or you only have literally one port.

The other is a design and aesthetics decision. If you solve the technical problem by only allowing battery charging from one of a few similar USB-C ports on the laptop, how do you convey this to the user? In the past the MagSafe port has been radically different from the other ports around in shape and size so it’s hard (Impossible? I never say that…users can stick things in all kinds of wrong places…) get it wrong. If you’ve got 2 or more identical ports how do you remember which one was for battery charging and which one wasn’t? I can see Ive and crew steadfastly refusing to have such an awful UI design flaw on an object that’s supposed to be very beautiful like this.

That seems, to me, to be a pretty plausible explanation for why we got only one USB-C port on the new MacBook when they could have easily had two; one on either side of the laptop.

I’m also certain we’ll see a new Cinema Display in the near future that supports either HDMI or USB-C for video in addition to Thunderbolt. The USB-C protocol doesn’t align with with the PCIe-based ThunderBolt protocol and I’m not convinced it’s possible to bridge the PCIe spec to USB to make a dongle from the new MacBook to an existing ThunderBolt-based Cinema Display possible. That should be a consideration if you’re buying one of these: you’re not going to get to use it with your existing Cinema Display any time soon, if ever at all.

Finally, can we all have a moment of silence for one of my favourite Apple connection standards of all time: MagSafe. You’ve saved me from more than a few MacBook disasters, MagSafe. I hope the future isn’t all power-over-USB-C, but I fear your time as a power connection standard on my laptops is limited. So long and thanks for all the saves.